The: Detroit: Tigers fell behind in the top of the first inning.

Early runs for the opposition typically results in a loss, considering the Tigers average an MLB-worst 2.78 runs per game, but in Monday’s game, manager AJ Hinch’s offense punched back several times.

Still, the Tigers lost, 9-5, to the Chicago White Sox in the first of three games in the series at Comerica Park.

A throwing error led to three runs for the White Sox in the top of the sixth inning, and although the Tigers (24-36) kept the score close, they could not complete a comeback.

Right-handed reliever Joe Jimenez gave up a two-run home run to Jose Abreu – his second homer of the game – in the ninth inning. Abreu finished 3-for-4 with four RBIs and a walk.

The White Sox already controlled a 4-3 lead when left-handed reliever Andrew Chafin crumbled in the sixth inning. The first two runners reached safely, and Reese McGuire dropped down a sacrifice bunt to advance them into scoring position.

On the bunt, Chafin made a crucial throwing error.

He threw the ball in the dirt and past third baseman Harold Castro, a failed attempt to get the lead runner out at third base. As the ball rolled to the wall in foul territory, Yoan Moncada and Leury Garcia scored to make it 6-3.

Chafin completed the sixth on 21 pitches, of which 18 went for strikes, and struck out two batters. Righty relievers Jason Foley, Michael Fulmer and Jimenez covered the final three innings.

The Tigers countered the White Sox with two runs the bottom of the sixth, trimming the margin to 7-5, thanks to a RBI singles from Harold Castro and Miguel Cabrera off left-handed reliever Bennett Sousa.

Sousa returned for the seventh and retired three straight batters.

In the eighth, the White Sox turned to left-hander Tanner Banks. Hinch used Jonathan Schoop (for Tucker Barnhart) and Eric Haase (for Kody Clemens) as pinch-hitters against the lefty.

Schoop grounded out and Haase struck out swinging for the first two outs. Willi Castro flied out to the back of the warning track in left field for the third out. White Sox righty Kendall Graveman fired a scoreless ninth.

Trailing 2-0, the Tigers cut their deficit in half on the first pitch from White Sox starter Lance Lynn. Returning from right knee surgery, Lynn completed three rehab starts in the Triple-A Charlotte before his first MLB start in 2022 at Comerica Park.

The 35-year-old righty was not sharp.

Leadoff hitter Willi Castro turned on a first-pitch fastball for a solo home run to right-center field. The first leadoff home run of his career traveled 398 feet with a 102.4 mph exit velocity.

On Báez’s swing, Castro scored to tie the game at two runs.

Robbie Grossman picked up the Tigers’ fourth hit in the first inning with a two-out single, but rookie Spencer Torkelson stranded a pair of runners when he struck out swinging on a full-count fastball in the middle of the strike zone.

In the second inning, the Tigers attacked Lynn for three more singles.

The first single came from Clemens, the first hit of his MLB career in his 10th game. He connected on a second-pitch sinker and put the ball through the hole and into the right field.

Barnhart followed up with a single of his own, but Willi Castro grounded into a double play. The double play, though, pushed Clemens to third base, and Harold Castro drove him home on a bloop single to center field.

Lynn kept the Tigers from scoring in the third and fourth innings. He allowed four runs on 10 hits – without a walk – and racked up four strikeouts over 4⅓ innings, throwing 52 of 88 pitches for strikes.

Before the Tigers could take the lead, the White Sox had the advantage on a two-run home run from Abreu with two outs in the top of the first inning. He destroyed a 2-1 curveball in the strike zone from right-hander Rony García, making his fourth start this season.

García put zeros on the scoreboard in the second, third and fourth innings. He worked around two walks during the three-inning scoreless stretch. Once the fifth came around, the White Sox broke through and chased him from his outing.

McGuire (double) and Danny Mendick (single) recorded back-to-back hits to open the fifth, with Mendick’s single in a full count scoring McGuire to tie the game at three runs.

Righty reliever Will Vest took over and allowed a second-pitch single. A double play helped him, but he could not put away Luis Robert in an 0-2 count. Robert singled to score Mendick for a 4-3 White Sox advantage.

García, throwing 41 of 75 pitches for strikes, gave up four runs on five hits and two walks with three strikeouts in four innings. He pitched into the fifth but did not record an out; Robert’s RBI single was charged to his tab. 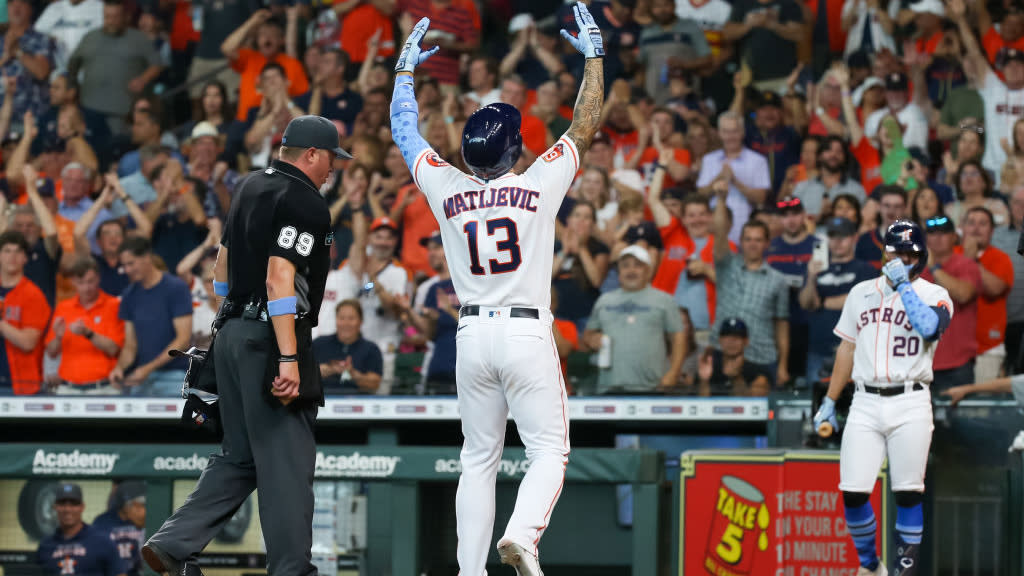