For Matthew Stafford, that’s the plan in place for the rest of the camp. And if you ask Sean McVay, there is no reason for concern.

On Wednesday, Stafford did not throw during any team drills as his workload continues to be limited due to the offseason injection in his elbow. Those reps were reserved for John Wolford, Bryce Perkins and Luis Perez. After practice, McVay told reporters that Stafford isn’t expected to throw in team settings for the rest of the camp, although he will continue working in individual drills.

“Don’t expect him to do anything in these team settings for this block or the next three days, next week,” McVay said. “Nothing has changed. Consistent with what I told you guys last week. This is part of the plan that we feel is in his best interest. … That’s the plan we think is best right now.”

Stafford isn’t being completely shut down, which is good news. But it’s certainly disappointing that he won’t be participating in team drills when the level of competition and intensity is turned up a notch.

It’s also not great that he’s missing out on opportunities to develop chemistry and a rapport with teammates such as Allen Robinson and Tutu Atwell, who very well could be the No. 2 and 3 receivers come Week 1, given Van Jefferson’s knee injury.

McVay said Stafford “wants to be out there and do everything,” but the Rams are trying to be smart with him so he’s as healthy as possible for Week 1. And as of now, it’s not certain that Stafford will be pain-free for the season opener, and McVay acknowledged that “you could” have that concern about it.

“I think that’s one of those things that we talk about where, ‘Hey, all we can do is what we can control.’ We feel like this is kind of the best approach to be able to take. Is there a possibility that that conversation occurs? Sure,” McVay said. “But based on the medical experts and the plan in talking with Matthew, this is what we think is best. I am optimistic that it will give us the best chance for him to feel as good as possible. Would you say, ‘Hey, you’d love him to have no issues and be out here playing and getting all these reps?’ Of course. But this is the thing that we think is best. This is one of those deals where you kind of take your own advice where, ‘Hey, let’s just be right here in the moment, take it a day at a time,’ and I thought we got better as a team today and we re getting some encouraging things. I think you want to be careful to say, ‘OK, well, it’s just been a couple days,’ but I think for us, being able to really give it a week, two weeks, is where you give it enough time to really see, ‘OK, is this new plan that we’ve implemented getting the results that we’re hunting up.’ I think everybody feels good about that and that’s the plan that we’re going to go with for the next couple of weeks.”

In essence, the Rams are just being as careful as possible with their starting quarterback. It’s not a bad idea, and being a long season with Super Bowl aspirations, it’s best not to risk his health for a few training camp practices.

And McVay made a good point. Stafford has accumulated so much experience throughout his career that he doesn’t necessarily need a full workload in camp to be ready for the season.

“I don’t know that I would feel as comfortable taking that approach if it wasn’t for the experience that he’s accumulated and knowing how intentional he is about staying up to speed with his mental and his physical work that he can do in the absence of some of the stuff in the team settings,” he said.

What’s most worrisome about this entire development is the fact that Stafford went into camp with a full workload. He was throwing normally when the Rams arrived at UC Irvine. It wasn’t until recently that he started feeling pain in his elbow again, which resulted in him having his reps lessened the last two practice sessions.

McVay is telling us that this was the plan all along, but is that entirely true? Would the Rams? really be holding Stafford out of team drills for two weeks if he wasn’t feeling pain in his arm? That’s hard to believe.

McVay said the Rams will reevaluate his status once they leave UC Irvine and start preparing for their first preseason game next Saturday, so there will be further updates then. But in the meantime, don’t expect to see Stafford throwing much in camp.

“He’s always going to want to continue to be out here, be with his teammates,” McVay said. “But he is so intentional with his approach that you feel good about that. That’s kind of the situation that we’re in, so we’ll deal with it the best we can.” 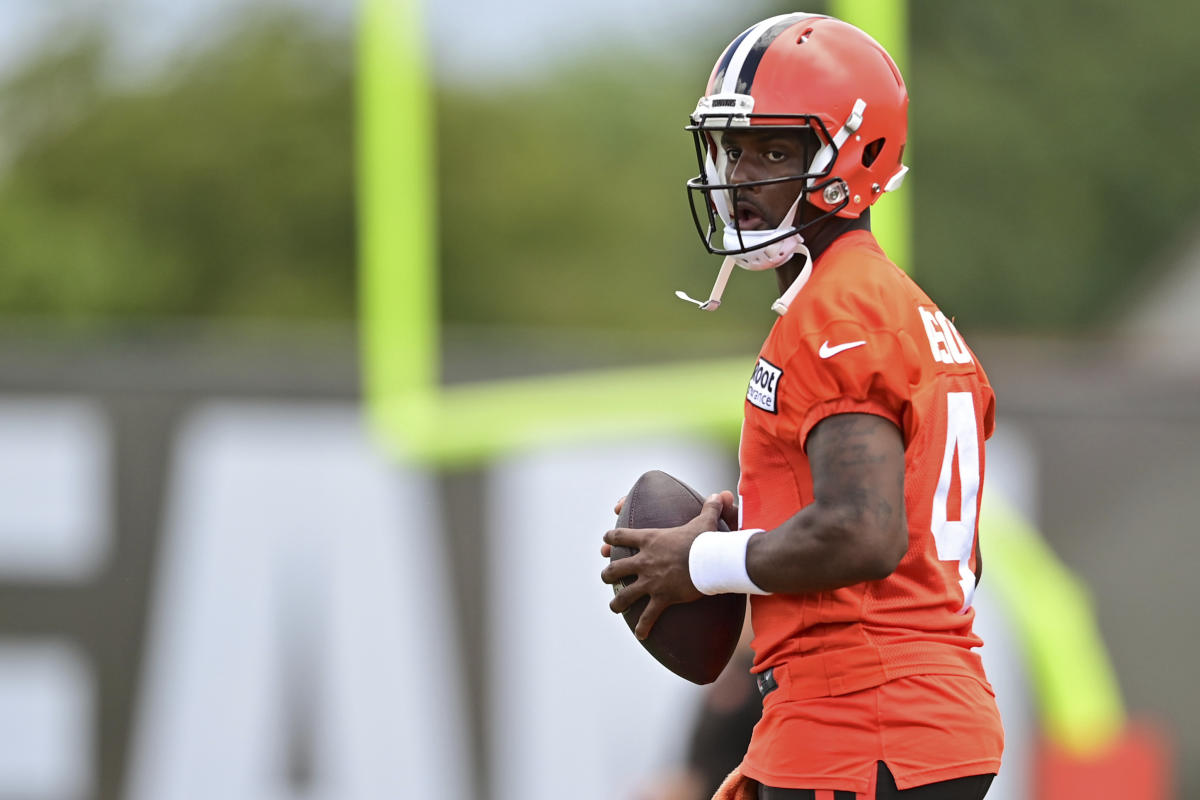 As the NFL’s Deshaun Watson case nears its conclusion, the next step is murky and frustrating

5 things to watch on the Lions’ Hard Knocks debut episode:

Oregon LB Noah Sewell could be in play