The Warriors went winless on their home court during their three summer league games in the California Classic at Chase Center. Things are about to get a lot more exciting in Las Vegas, though.

Bigger names are expected to play, the stars come out in Sin City and a glimpse of Golden State’s future will be on the court not even one month after winning it all. The Warriors are guaranteed to play at least four games during the upcoming Las Vegas Summer, starting Friday night against the New York Knicks. There are countless reasons to tune in.

Ahead of the Warriors’ return to the floor, here are five storylines to watch this year in Las Vegas.

Although James Wiseman did not play in any of the Warriors’ three California Classic games, the young center made progress behind closed doors. He’s now playing full-court, full-contact 5-on-5 scrimmages. Wiseman’s knee is responding well and he remains on track to make his return in Vegas.

It sounds like it won’t be Friday night, though.

Warriors assistant Jama Mahlalela, who is serving as their summer league coach in Vegas, said Wednesday that Wiseman has “had amazing progress.”

“In the next few games — probably not this first game — I do imagine we’ll be seeing him,” Mahlalela said to reporters. “It’s a day-to-day thing, but he’s making tremendous, tremendous progress.”

Wiseman is entering Year 3, but this would be his first taste of summer league since the Warriors drafted him No. 2 overall in 2020. He missed all of last season to complications following surgery on a torn meniscus in his rookie year. The 21-year-old has only played 45 games of basketball — three in college, 39 in the NBA and three in the G League — since making his debut on Nov. 5 in 2019.

Golden State still sees Wiseman as its center of the future, even after bringing Kevon Looney back on a three-year contract. But he has to start playing games again, and that should be the case in Vegas.

While Wiseman had to watch the Warriors’ entire season from the sidelines, Jonathan Kuminga and Moses Moody were contributors to a championship team at 19 years old. The two lottery picks have different skills and are at different places right now.

Kuminga, still 19, is the natural athlete who is seen as having sky-high potential. He flashed real stardom at times last season. He also showed how much he still has to learn.

Moody, now 20, played the final two games of the California Classic. He struggled to find his shot from deep but showed his basketball IQ as the Warriors put the ball in his hands more often during the summer. Moody’s already a trusted player, whose floor will keep him on the court.

After a trip home to the Congo, Kuminga flew into Vegas on Wednesday. He most likely also won’t play Friday night, and could be back in any or all of the Warriors’ guaranteed three games after that. Whenever that happens, watch out below.

A big Kuminga dunk is bound to happen in the near future.

Taken with the no. 28 pick in last month’s draft, the Warriors are playing it patient with Patrick Baldwin Jr.

The former top high school recruit dislocated his left ankle during the second game of his senior season in high school. He aggravated it during his one college season at Milwaukee and it affected him there as well. Baldwin played 11 games as a freshman and did not perform as he or anyone else expected.

But the Warriors knew the low risk was worth a high reward in adding Baldwin late in the first round of the draft.

As of right now, Baldwin isn’t going through contact or scrimmages, but is doing all shooting and non-contact drills. Mahlalela said Wednesday that Baldwin is “shooting the ball really, really well.” When healthy, that should be the 6-foot-10 forward’s bread and butter. He hasn’t received the go ahead for games, but his development is still front and center.

And there’s still hope that Baldwin could still see the floor in Vegas. If it doesn’t, there’s no need to panic.

Quinndary Weatherspoon held one of the Warriors’ two two-way contracts last season, and he’s in line to do so again. However, the athletic guard is also fighting for a spot on the 15-man roster. His defense and bounce can contribute at the highest level.

Now in Vegas, he has to show some consistency with his shot.

Ryan Rollins’ situation complicates things. The Warriors spent $2 million to move up from No. 51 in the draft to No. 44 to take the 6-foot-3 guard with a 6-foot-10 wingspan out of Toledo. At one point, they were even trying to move up to No. 30 for Rollins. That’s how high they regard him.

Here’s the complicated part. Rollins has a stress fracture in his right foot that was revealed during his mandatory physical and cannot play in the summer. He believes it’s more of a precautionary move than anything. General manager Bob Myers said before Rollins’ injury that he expected him to be on the 15-man roster. Is that still the case?

One two-way contract belongs to Lester Quiñones. The 6-foot-5 guard/wing from Memphis is a sharpshooter who shows some two-way ability with his defense. He shot 39 percent from deep as a junior and scored 19 points in his second California Classic game.

With Rollins out for the summer, the Warriors have also added an exciting prospect to watch in Las Vegas…

For the Overtime, Ball Is Life, mixtape crowd — you’re well familiar with Mac McClung. The 6-foot-2 guard can jump with the best of them and is bound to open eyes with some highlight-reel plays and dunks. That’s what he’s been doing for a long time now.

He knows how to score a bucket and filled the stat sheet, too.

Over his three-year college career, two at Georgetown and one at Texas Tech, McClung averaged 14.7 points per game. He was named Big East All-Freshman and 2020-21 All-Big 12 before going undrafted. As a junior, McClung shot 34.3 percent from 3-point range.

This past Sunday, McClung scored 17 points and grabbed five rebounds for the Los Angeles Lakers’ summer league team against the Warriors at Chase Center. McClung played two games — one with the Chicago Bulls and one with the Lakers — in the NBA last season. In the G League for the Lakers’ affiliate, McClung shined.

With the South Bay Lakers, McClung averaged 21.6 points, 7.6 assists and 6.6 rebounds per game while being named the G League’s Rookie of the Year. Players move around summer league rosters all the time. Either way, this will be a fun wrinkle to watch over these next few games. 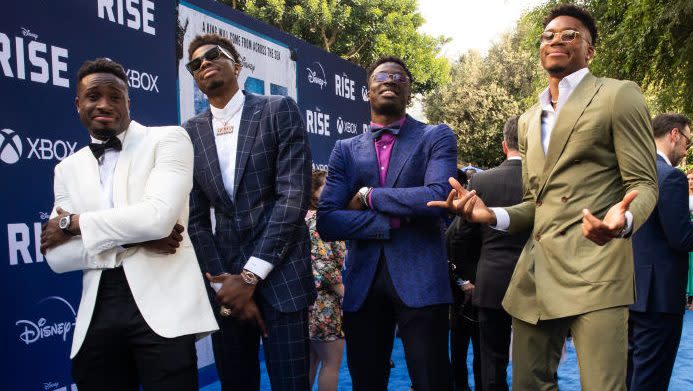