When he bought the New York Mets two offseasons ago, billionaire owner Steve Cohen cited the Dodgers as an organization to emulate, eager to model his own club after the heavy-spending, consistently-winning, big-market behemoth on the opposite coast.

On Thursday, Cohen and the Mets got a first-hand example of all the reasons why.

In the opening game of a highly anticipated weekend series between the National League’s two best teams so far this season, the Dodgers flexed their organizational might to earn a 2-0 win at Dodger Stadium.

A stellar staff performance on the mound was highlighted by six scoreless innings from Tony Gonsolin, a homegrown talent who was once an afterthought in the country rotation but now leads the NL with a 1.59 ERA.

A high-priced, big-name lineup did just enough at the plate, manufacturing one run in the fifth inning on a Mookie Betts RBI single and another in the sixth inning on a Justin Turner RBI double while outhitting the Mets 8-3.

And while the two teams finished the night tied atop the league standings, each 17 games over .500 almost two months into the season, the Dodgers made an early statement in a matchup that could very well define this season’s pennant race.

“I think people have had this series marked on their calendar,” manager Dave Roberts said.

The Dodgers tried to temper the importance of this week’s series prior to first pitch.

Roberts brushed aside any notion of this being a measuring stick or litmus test series. First baseman Freddie Freeman said the team was simply trying to bounce back from a confounding three-game sweep at the hands of the Pittsburgh Pirates earlier this week.

“You just got to play good baseball,” Freeman said. “Yes, the Mets are on the other side. They have good players. I think it’s just gonna be a great series. “

Still, while this is familiar territory for the Dodgers, the Mets are treading relatively new ground.

Off to their best start in more than 30 years, they’ve ridden a resurgent offense and makeshift pitching staff to a double-digit game lead in the NL East.

Even without their best two arms – Jacob deGrom has yet to pitch this season because of a stress reaction in his right scapula, and former Dodgers ace Max Scherzer has been sidelined the last couple weeks with an oblique strain – they still ranked 10th in the majors in team ERA.

And a lineup that was once an annual disappointment has become their most encouraging development yet, trailing only the Dodgers in runs-per-game and on-base-plus-slugging percentage.

“They got guys that can run counts, that can be a pest at the plate,” Roberts said. “They can manufacture, they can slug you.”

The Mets’ near $ 288 million payroll – which ranks second only to the Dodgers, but is worth even more bang for the buck considering Trevor Bauer’s empty salary – has also heightened expectations in Cohen’s first full year owning the team.

It was in Cohen’s first meeting with the media following his November 2020 purchase that he referenced the Dodgers by name, pointing to them when asked which MLB club he wanted to model the Mets after.

“I like what the Dodgers are doing,” he said. “They have a really strong farm system. They take advantage of opportunities in the marketplace for free agents and trades. They run a pretty good business operation too. ”

When reminded of those comments Thursday, Roberts slyly smiled.

“What do they say is the best term of flattery, imitation?” Roberts said, adding: “We’ve done a great job. So if there’s someone you want to emulate – smart man. ”

Once a division foe of the Mets while with the Atlanta Braves, Freeman had a front row seat to much of the club’s recent struggles, which have included five straight seasons without a playoff berth.

“They’ve always had a good team,” Freeman said. “They’ve put it together this year.”

On Thursday, however, the Dodgers were still superior.

Gonsolin gave up just two hits and one walk in his latest gem, continuing to buoy a Dodgers rotation that could have more reinforcements on the way, with Clayton Kershaw and Andrew Heaney both scheduled to go on rehab assignments this weekend.

Betts continued his torrid pace at the plate, going two for four to raise his batting average to .310.

Even slumping closer Craig Kimbrel got back on track, earning his 11th save after a two-day break.

“Collectively,” Roberts said, “we did a really nice job.”

And then some, striking an opening blow against the team that, to this point, appears to be their biggest threat. 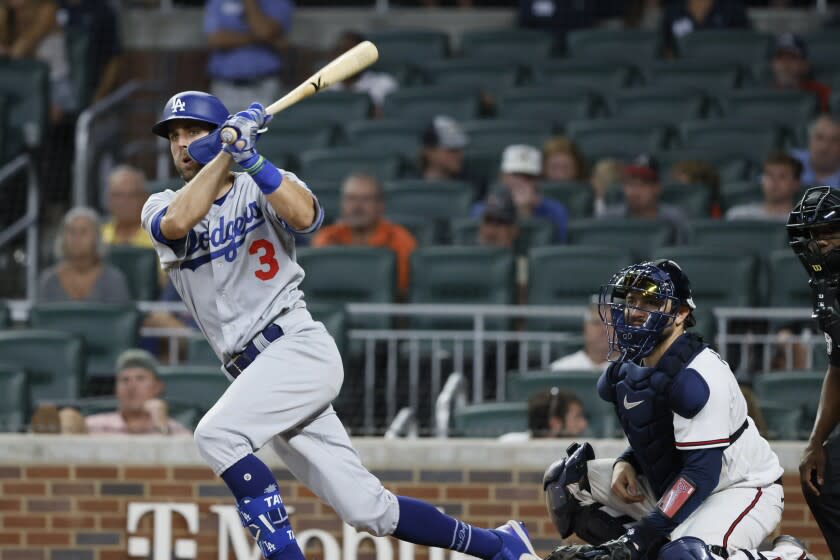