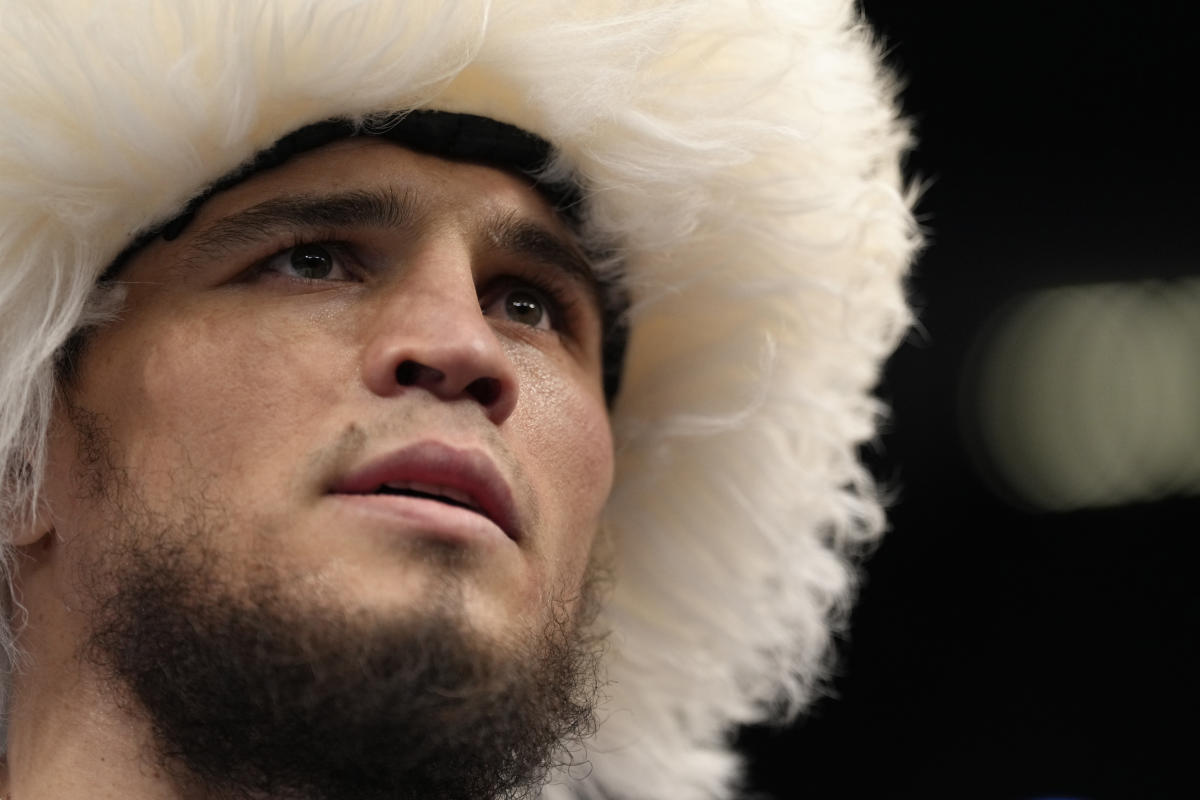 LAS VEGAS – The weight of expectations has brought down many a great athlete. The expectations only swell when you’re related to one of the best-ever in your sport.

Umar shares Khabib’s name. Like Khabib, he’s undefeated in his MMA campaign. And he wears the familiar Papakha that Khabib made so famous in MMA circles.

So far, though, Umar has shown no signs of being weighed down by the inevitable comparisons to his legendary cousin, who now serves as his coach.

Umar is 14-0 overall in MMA and 2-0 in the UFC heading into Saturday’s three-round bantamweight bout at Apex against Nate Maness. Nurmagomedov has scored submission victories over Sergey Morozov and Brian Kelleher in his first two UFC bouts.

Javier Mendez, one of his coaches, has handled some of the best MMA fighters ever, including Khabib Nurmagomedov, former UFC heavyweight champions Daniel Cormier and Cain Velasquez and former middleweight champion Luke Rockhold.

Umar has the talent, Mendez said, to eventually put his name alongside those types of fighters.

“He will beat everyone [in his division], ”Mendez said. “He could fight for the title now, but it’s best to get him a few more fights to get him some experience.”

Given he’s not ranked, he’s a long way from a title shot. The bantamweight division is loaded with elite athletes hoping for a shot at champion Aljamain Sterling, it’s soon to get even deeper. Former champion Henry Cejudo has reentered the USADA drug-testing pool and plans to compete later this year.

Sterling will defend next against No. 2 TJ Dillashaw, but even fighters at 11 through 15 in the UFC’s bantamweight rankings are imposing. Ricky Simon and Frankie Edgar are tied for 11th, with Sean O’Malley at 13, Jack Shore at 14 and Adrian Yanez at 15.

Like his cousin, though, Umar oozes confidence. And while he’s not making waves and expresses respect for Maness, he believes he’s ready for the best. He would like to see ranked fighters next, if possible.

“I think I’m ready for these guys,” he said. “I do not want to push, but if they give me a Top 15, anybody, I’m ready. I know this. I can compete with those guys. But I do not know who they’ll put me against after this fight. We’ll see. ”

At the highest levels of MMA, it’s almost as much of a mental challenge as it is a physical one. All the opponents are highly skilled and capable of doing things that most mere mortals can not even imagine.

That’s always an adjustment for UFC newcomers. At the regional level, they often overwhelm far-less-talented opposition with their physical skills. But when they get to the UFC, they are facing opponents who have similar skills to them.

Mendez knows that because of the last name, there will be a microscope on Umar with plenty of comparisons to Khabib.

But Umar grew up in Dagestan, Russia, training with Khabib, top lightweight contender Islam Makhachev and other elite fighters and is familiar with the scrutiny.

“He will become successful and he 100 percent has the mindset to: [deal with comparisons to Khabib], ”Mendez said. “Khabib, Umar and Islam did not need my help with mental training out of the Dagestan crew.”

Umar has the patience needed to ride it out. He wants to get to the top as soon as possible and does not feel he needs to be fed a diet of lesser opposition.

But through his talks with Khabib and Makhachev, he’s learned to understand the business aspects of the sport. Mostly, he gets that he’s not going to make the calls when it comes to his opposition.

“I want to: [move] quickly, ”he said. “But we have to see how it’s going to be, who: [the UFC] puts against me. They choose. I have to show my skills and I have to show how I can fight and put on good performances. That’s it. I have to do my job and they have to do their job. ”

Power-ranking all 8 knockouts (and 1 submission) at action-packed fight card: